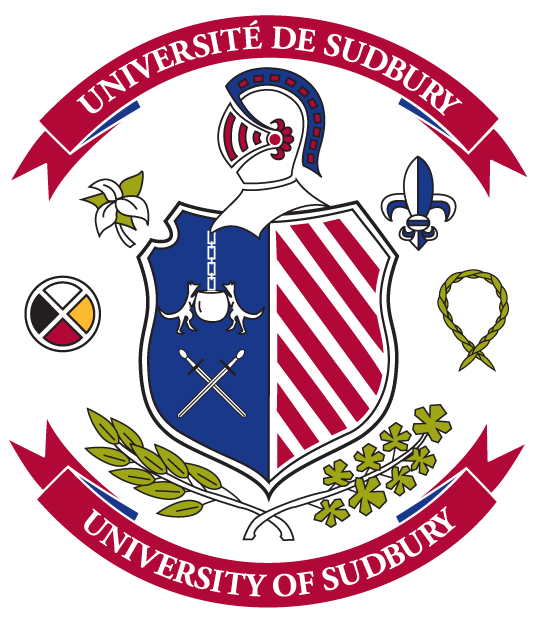 The shield is halved: one side for the Loyola family, the other for the saint’s Onaz ancestors. On the left, which is blue, a cauldron is suspended between two white wolves facing each other. Below them are two crossed silver swords. On the right, seven red stripes pass obliquely from left to right against a white background. Above the crest is a Knight’s helmet in profile facing left, and on its left and right sides respectively are a white and green trillium and a blue and white fleur-de-lys. At the bottom of the shield are crossed boughs of laurel and maple leaves.

The wolves and cauldron represent the Loyola name (lobo y ola) and stand for generosity and hospitality. The helmet and swords represent the chivalrous virtues of courage, courtesy, honour and dedication; the seven red stripes evoke the sacrifice of the seven Onaz brothers who gave their lives as Crusaders. The trillium and fleur-de-lys recall the University’s Franco-Ontarian origin, the laurel and maple leaves, symbolize the ideal of academic excellence in Canada.

Recognition of the Indigenous community was added to the emblem a few years ago with the Medicine Wheel and braid of sweetgrass.

The Medicine Wheel is used by Indigenous peoples for health and healing, and is considered a major symbol of peaceful interaction among all living beings on Earth. The Four Directions are symbolic of the cycles/stages of life, the seasons of the year, aspects of life (spiritual, emotional, intellectual, physical), elements of nature (fire/sun, air, water, earth), animals, and sacred/ceremonial medicines/plants. The Medicine Wheel is also a teaching tool and the University of Sudbury is a place for teaching and learning.

Sweetgrass is a ceremonial plant used for smudging, during prayer and as an offering. A purifying and cleansing herb, sweetgrass is symbolic of healing, peace, and spirituality. The braid symbolizes strength, unity and community. The three strands of the braid also represent the three languages of the university: English, French, Anishnaabemowin.

The emblem’s colour palette consists of a rich shade of red, a bold blue, as well as black, earthy green and deep yellow.